Contributing to the EEGLAB core code

The main EEGLAB repository is not the place to add new functions. Instead, this is done by creating EEGLAB extensions/plugins. However, it is possible to modify the core code to either fix bugs, or add minor improvements to existing functions.

The chief EEGLAB software architects are Arnaud Delorme and Scott Makeig. The predecessor to EEGLAB, the ICA/EEG Toolbox (1997-2001), comprised functions written by Makeig with Tony Bell, Colin Humphries, Sigurd Enghoff, Tzyy-Ping Jung, Te-Won Lee, and others, was first released on the Web in 1997 by Scott Makeig at the Computational Neurobiology Laboratory of Terrence Sejnowski at The Salk Institute, La Jolla.

The first version of the integrated EEGLAB toolbox was written there by Delorme and Makeig with subsequent contributions by many, including Marissa Westerfield, Jörn Anemüller, Luca Finelli, Robert Oostenveld, Hilit Serby, Toby Fernsler, Nima Shamlo Bigdeley, Jason Palmer, and many others. Dedicated beta testers include Andreas Romeyke and his team, who developed a test suite for EEGLAB, and other advanced users, including Stefan Debener and Andreus Widmar.

EEGLAB development is now centered at the Swartz Center for Computational Neuroscience (SCCN) of the Institute for Neural Computation at the University of California San Diego (UCSD). Core EEGLAB maintenance and development is supported by the US National Institute of Neurological Disorders and Stroke (NINDS).

The EEGLAB core code cannot be modified by third parties directly. Instead, users submits pull requests. EEGLAB core developers then review the code and add it to the repository.

For third-party developers, we welcome collaborations with users and open-source developers to expand and improve EEGLAB functions and/or independently write and release EEGLAB plugin/extension applications and environments. If you have written plugins for use in your laboratory, please consider releasing them for use by others, as described on this page.

EEGLAB is under active open-source development. Together with user developers, we are extending its capabilities to include across-subject general linear model statistics. User-contributed features and suggestions are welcome, and we encourage and plan to interconnect EEGLAB with other MATLAB-compatible toolboxes.

EEGLAB is an open-source software environment and is available free of charge to any user.

However, EEGLAB requires that you purchase and install the commercial MATLAB software environment. MATLAB version 2008b or later is required; We recommend using the latest version of MATLAB. MATLAB and EEGLAB run under Linux/Unix, Mac OS X, or Windows. Purchasing MATLAB can be expensive, though the MATLAB student version is usually priced near $50 US.

We have attempted to remove all dependencies on add-on MATLAB toolboxes. Thus, no additional toolboxes are necessary to run the EEGLAB core distribution. However, some advanced plugin toolboxes may use functions from a specific MATLAB toolbox: see their documentation for details.

Note that all EEGLAB processing functions (not its graphic interface) also can be run under the free Octave environment. EEGLAB also exists as a compiled program that does not require MATLAB.

EEGLAB is distributed under the BSD license. Any contributed functions we add to EEGLAB will be made available for free commercial and non-commercial use under this license.

Contributors are acknowledged on GitHub, which record commits made to the main source code.

Consider writing an extension or plugin option, as described in the section below. EEGLAB extensions allow authors to flexibly incorporate new functions into the EEGLAB menu of every user who has downloaded the extension. The authors also retain all commercial rights to the functions they write.

We strive to follow a code of conduct emphasizing community, collaboration, respect, and responsibility first outlined by the Ubuntu community.

To contribute code to the EEGLAB core code, fork the code and create a pull request as indicated below. You will need a Github account to perform these operations but do not require any special permission from us.

Why fork the EEGLAB repository?

This page assumes that you are somewhat familiar with GitHub, Git, and version control.

Forking (copying) a software repository makes a copy of the repository that belongs to you. This allows you to experiment without affecting the existing code. Once you are done with your changes, you will be able to transfer them (push them) to the main repository by using pull requests (this could have been referred to as push requests, but the software community decided to name it from the perspective of the main repository, which then is pulling in your changes). This page will introduce you to the basics of forking the EEGLAB repository. Github makes the procedure very simple.

To fork the EEGLAB repository from Github, follow these two simple steps: 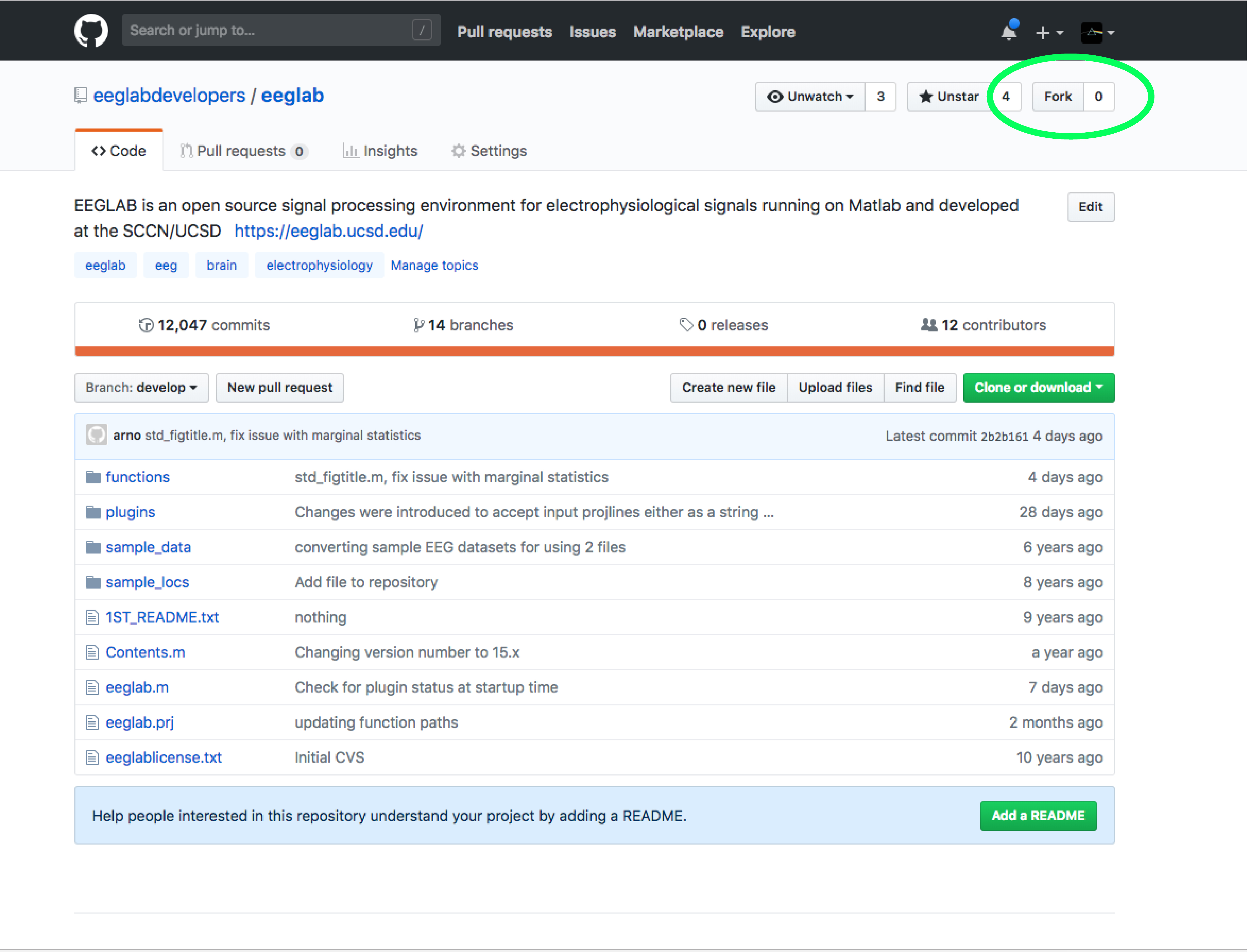 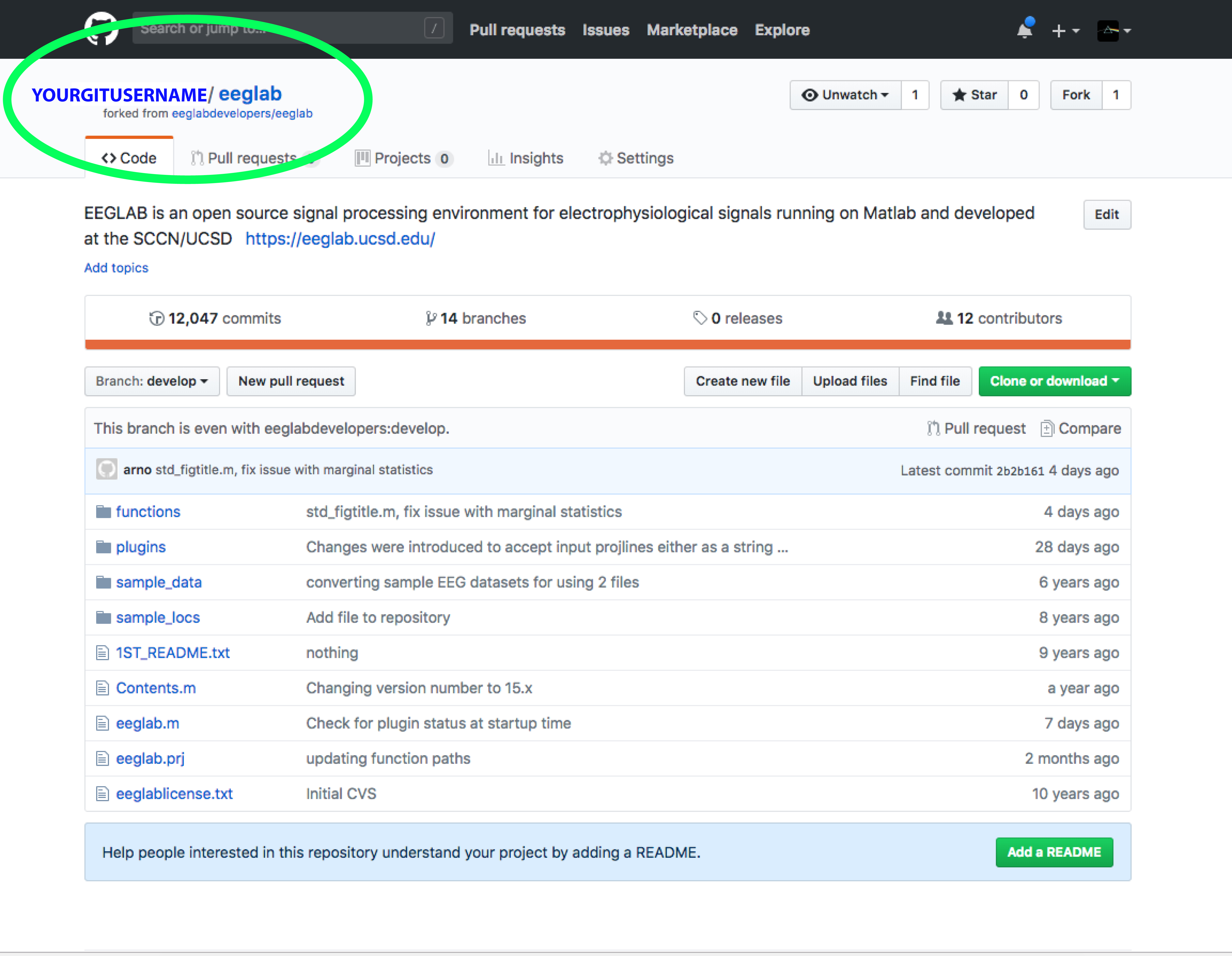 Working on your forked copy 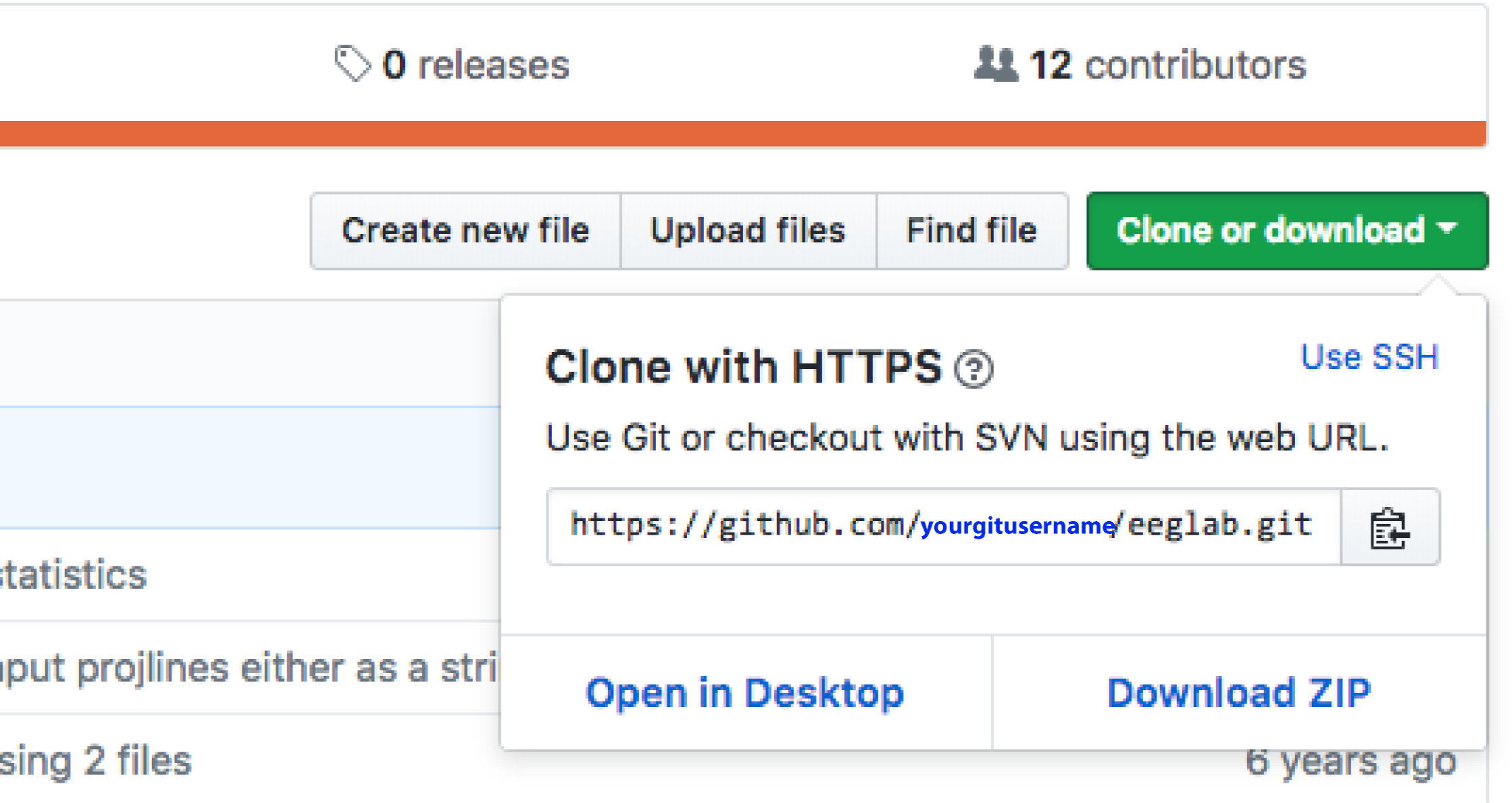 After following these steps, you will be ready to start modifying the EEGLAB code.

Once you are satisfied with your code changes, commit them to GitHub. Then, go back to Github and issue a pull request. Once your changes are evaluated and approved by the EEGLAB team, they will be merged into the EEGLAB master code. 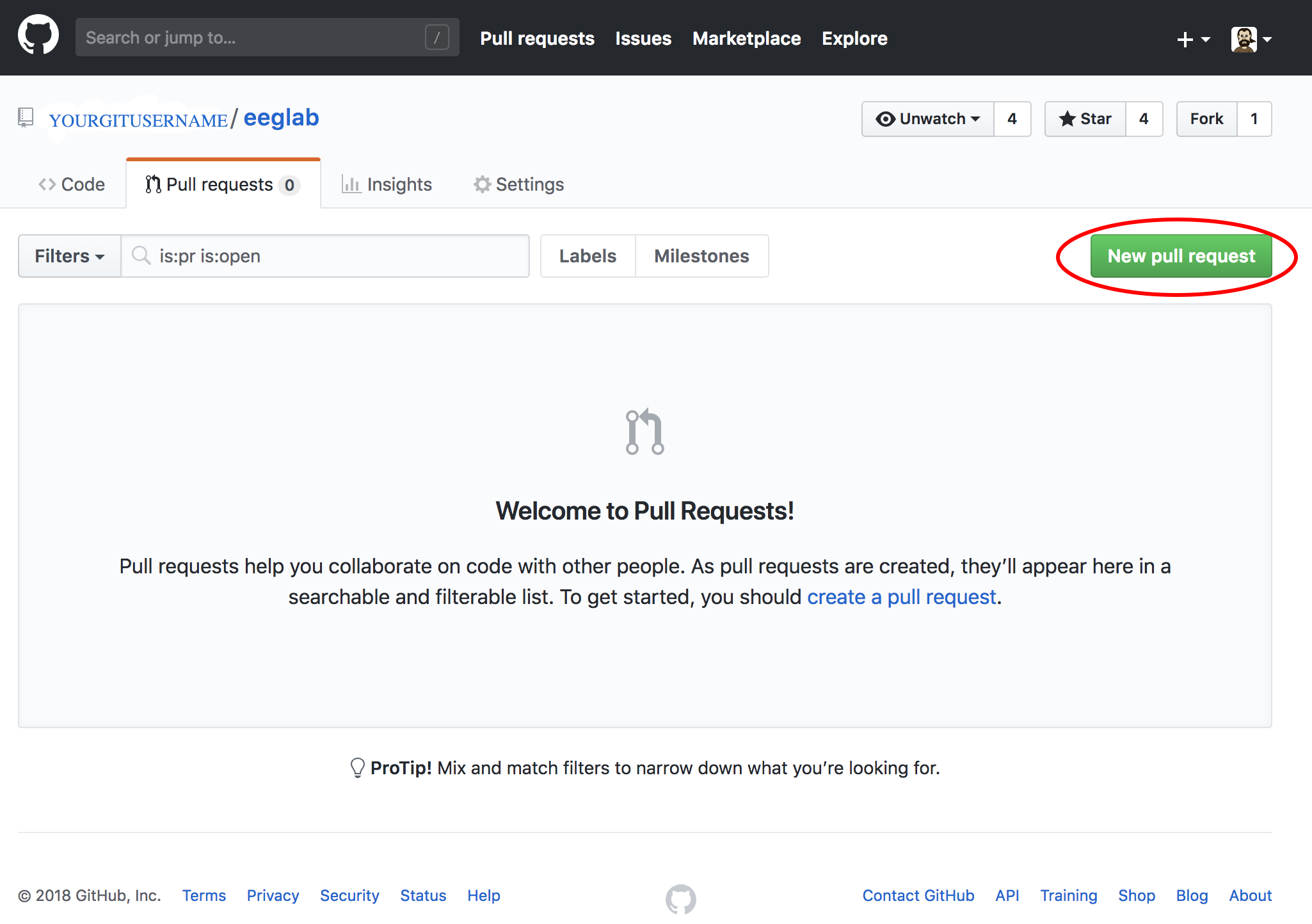 This brings you to a screen where you can select the forked branch to merge into the EEGLAB repository. NOTE: Always merge into the “develop” branch of EEGLAB.