Three fiducial or anatomical landmark points are typically used to define a system. See this Fieldtrip FAQ page for details on how the origin and the axes are defined in different systems.

EEGLAB uses two electrode montage for 2-D representation and source localization: the BESA and standard MNI BEM montages. These electrode systems are based on a sphere that best matches the geometry of the human head. This coordinate system is shifted upward compared to the coordinate system defined as nasion, left, and right fiducials (LPA and RPA). It is also tilted forward, so Cz is defined as vertical. The reason for shifting the coordinate system up is that a sphere would not match the head well – it would not match the head well if we used a sphere centered at the origin of the nasion, LPA, and RPA coordinate frame.

When plotting 2-D scalp maps, Fpz is situated at the outer limit of the head. This might seem biased as FPz is clearly not located in the middle of the forehead in actual caps. Yet, considering the view below (from Chatrian et al., 1988), this keeps Cz at the vertical of the reference frame. 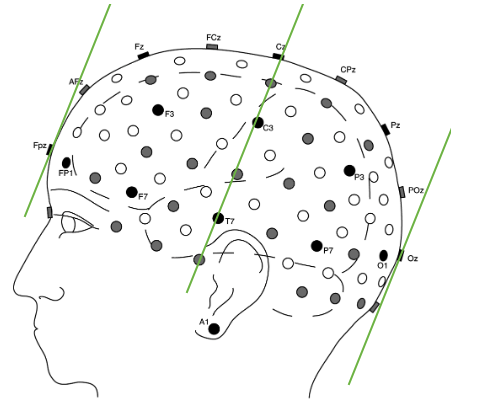 In general, if you want to perform source localization with 10-20 montage and do not have scanned electrode locations, we advise that you use the electrode of the BEM template EEGLAB location file (the default when you select Look up locs in the channel editing window. This file is well-validated.

It does not mean you are stuck with the associated 2-D electrode layout, though. To achieve the desired 2-D effect, you may apply any linear transformation of the 3-D electrode coordinates. These transformations may be compensated for when coregistration them with the head model. For example, if you want to place the fiducials close to the outer limit of the head plot, you can transform the BEM template coordinates by shifting the center of the sphere down by 40 millimeters (Opt. head center in the channel editing window). The result is shown below. The figure below shows 81 electrodes in the original BEM coordinate system, the change in the origin of the 3-D coordinate frame, and the resulting 2-D project.

This is not an ideal layout, as electrodes near the outer head limit are more spaced than electrodes near the center. A better option is to ask EEGLAB to change the head limit (the default is 0.5). Once you make these changes, it will affect all the 2-D plots for this dataset (EEGLAB 2023.0 and later versions only). On the command line, type

You may actually add any topoplot.m) options (for example ‘electrodes’, ‘on’ to show electrodes on all the plots). The screen captures below show a head radius of 0.4 (left), the default 0.5 value (center) and 0.68 (right).

There is an extensive collection of EEGLAB template files when you look up electrode coordinates. For example, below, we import an EGI 128 channel file and show it the layout. It is fine to perform source localization with this file as it is impossible to use the template BEM location file (EGI channels are not defined in the 10-20 system). If Fieldtrip is installed, its available electrode files are also shown.

Create and optimize your own montage

Sometimes you might want to create your own montage. For example, you might want to add some electrodes in specific locations, and usually cap manufacturer will accommodate you. You might also want to maximize head coverage, including adding electrodes as low as possible (see this project). We recommend maximum head coverage instead of dense coverage in the upper head region. Because of volume conduction, the bottom electrodes capture a lot of depth information and are useful for source localization.

If you are adamant about using a specific electrode layout for 2-D representation, you may use do so. However, you should not use the electrode locations for source localization or 3-D plotting as they are defined for 2-D plotting only (even though EEGLAB will automatically infer 3-D coordinates for them).

EEGLAB allows importing a variety of layouts. For example, below, after the tutorial dataset eeglab_data.set, we use the eeglab_montage11_layout.loc layout. To do so, call the channel editor using menu item Edit > Channel locations, then click on the Look up locs button. Depending on the layout, you may have to adjust the plotting radius in the channel editor interface, so the entire head is visible. EEGLAB also allows importing Fieldtrip’s layouts if it is installed. The figure below shows some of types of 2-D electrode layouts available.

The default EEGLAB electrode coordinate system for datasets with anatomical landmarks labeled ‘LPA’ and ‘RPA’ as shown in the figure below. For backward compatibility purposes, this coordinate system is used regardless of whether the points labeled ‘LPA’ and ‘RPA’ are marked according to their formal definition (points on the posterior root of the zygomatic arch, see here for more details).

The exact ear anatomical landmark may be included with the EEG or MEG data (e.g., in the AnatomicalLandmarkCoordinateSystemDescription field of *_coordsystem.json for BIDS specification). It is identical to the CTF coordinate system for MEG.

As shown below, even when properly defined, the 3 points LPA, RPA, and nasion may not represent a perfectly orthogonal reference frame. Only one plane passes through these 3 points. The Z direction is set to be orthogonal to this plane. The center of the reference frame is defined (in this plane) as the intersection of a line passing through the nasion (+X direction) and an orthogonal line whose distance is equal for LPA and RPA (we define the distance as the length of the segment for the orthogonal projection of these points on the line).

Use the helix-tragus junction for fiducials

PA points are palpable anatomical features but are challenging to locate in anatomical MR head images and 3-D EEG electrode scans. Furthermore, some experiment protocols call for using other anatomical points on the ears (e.g., ear canal, ear lobes, etc.) while retaining the inaccurate PA label. While consistency is critical when gathering data for a study, collaborative or data mining projects are undermined when accurate labels or descriptions are not used. With photogrammetry improving the availability of electrode localization, we strongly recommend using the helix-tragus junction (LHJ & RHJ) as the ear fiducials: these points are identifiable in 3-D head models as well as MR head images. 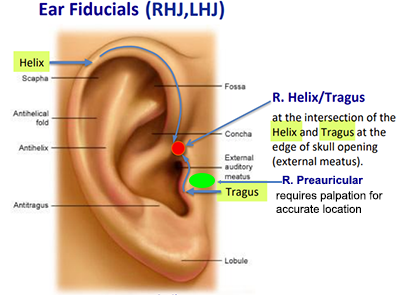 This is the coordinate system we recommend for get_chanlocs, an EEGLAB plug-in for photogrammetric electrode localization using 3-D head models. The default EEGLAB coordinate system, except the aforementioned helix-tragus junction (HJ) points, is used as the ear anatomical landmarks.