For detailed background theory on re-referencing EEG data, please refer to the Appendix. We describe below how to specify the reference electrode(s) in EEGLAB and to (optionally) re-reference the data.

Calculating an average reference is recommended for source localization.

Select Tools → Re-reference the data to convert the dataset to average reference by calling the pop_reref.m function. When you call this menu item for the first time for a given dataset, the following window pops up. 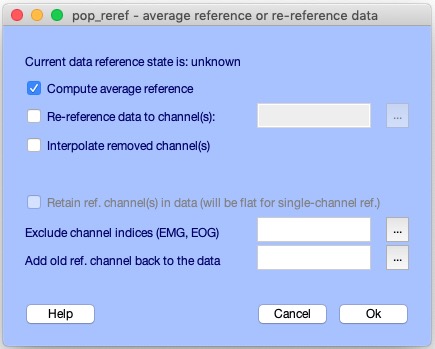 Press the Ok button to compute the average reference. This step will then be recorded in the main EEGLAB window (not shown). As in the previous step, a dialogue box will appear asking for the new dataset’s name.

Note that the re-referencing function also re-references the stored ICA weights and scalp maps, if they exist.

For this example, we will use the TEST.CNT dataset. Save the file on your hard drive and import it in EEGLAB using menu item File → Import data → Using EEGLAB functions and plugins → From Neuroscan .CNT file.

To declare Cz as a reference, call the channel editor window using the Edit → Channel location menu item, go to the last channel and press the Append button. An empty channel is created. Fill up the channel label (enter “Cz” in the Channel label edit box) and enter the position of the channel if you have it. You may enter the X, Y, Z locations and press the XYZ -→ Polar & Sph. to convert the 3-D Cartesian coordinates to polar and spherical coordinates. In the channel editor, references are placed after all the data channels (note that the checkbox Channel in data array is unchecked since these are not actual data channels associated with this electrode location).

If you do not have the electrode location, you may simply press the Look up locs button to automatically look it up based on the 10-20 channel label (note that this will look up the location of all electrodes). 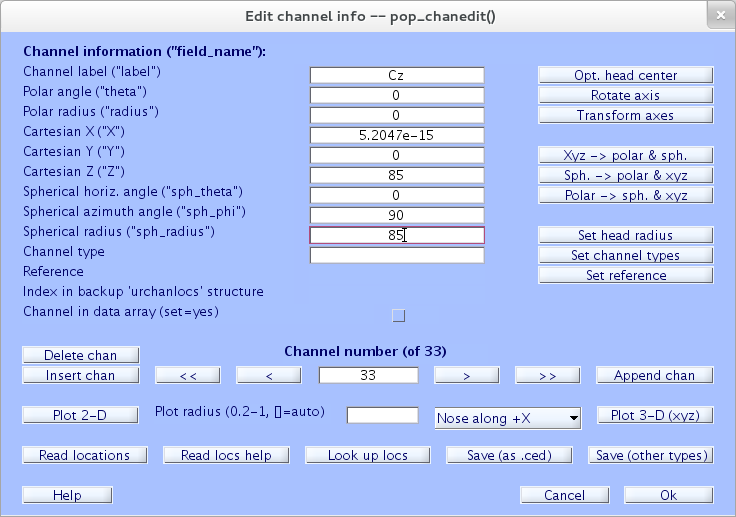 Then press the Set reference pushbutton to set the reference to all channels to Cz (“Cz” needs to be typed into the checkbox and the channel range needs to be entered manually).

Press OK. The re-referencing interface should look like the one below.

Then press Ok to actually re-reference your data. Your data is now average referenced and you have added back Cz (the original reference) to the data. The reason for this overly complex procedure is that the reference channel can have a location and that this location needs to be declared in the channel editor so it can be plotted along with other channels.

If you wanted to further re-reference your data to another reference (linked mastoid, for example), you may call the Tools → Re-reference the data menu item again.

Say you collected data with reference M1 (mastoid) and want to process your data using linked mastoid (M1 and M2) as reference. The process is as follow:

REST (Reference Electrode Standardization Technique) is a re-reference technique for translating multichannel EEG to a new dataset with reference at Infinity where the potential is zero/constant. It is implemented in the REST EEGLAB plugin available on the EEGLAB plugin manager using the File → Manage EEGLAB extension menu item.