There are several steps required for source localization. First, choosing a head model, which defines different regions of conductivities. Second, choosing a source model: The source model is the type of source you will use. This may be a single dipole, which position you optimize. This could also be a distributed model, with one dipole per brain voxel, such as when using Loreta. The source model is independent of the head model. Third, you will perform inverse source localization and plot the source results.

This section deals with the first step only of choosing a head model and aligning it with your electrode locations. Other steps are described in subsequent sections of the tutorial.

In this section, we use the tutorial dataset after extracting data epochs. Select menu item File and press sub-menu item Load existing dataset. Select the tutorial file “eeglab_data_epochs_ica.set” located in the “sample_data” folder of EEGLAB. Then press Open.

Before running DIPFIT, we must select some input parameters. Select the EEGLAB menu item Tools → Locate dipoles using DIPFIT → Head model and settings to modify DIPFIT settings. This will pop up the window below:

For this example, select Boundary element model. Clicking on the model name updates some of the fields below the dropdown menu:

Next is the coregistration, which is explained in detail in the following sections. 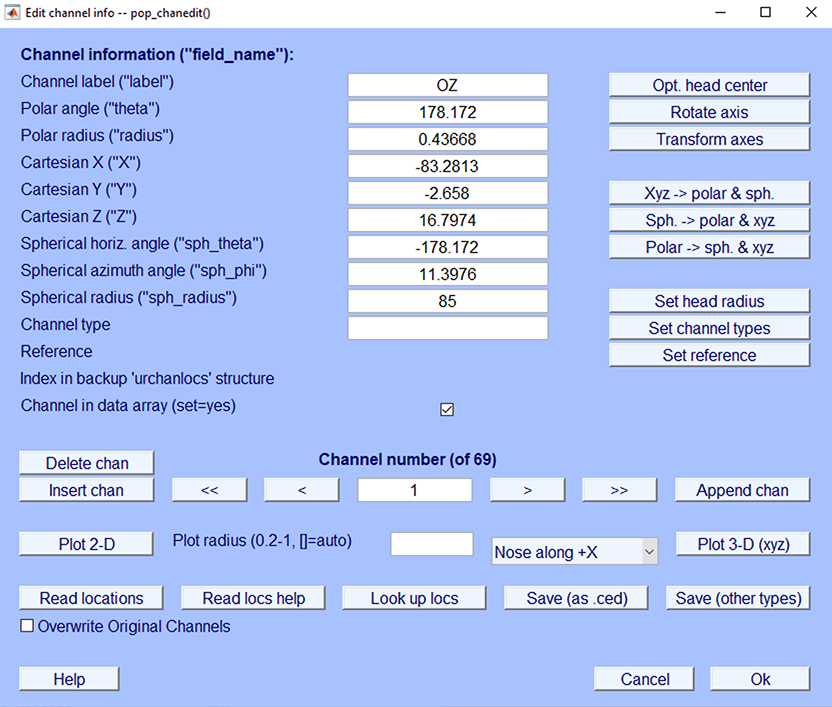 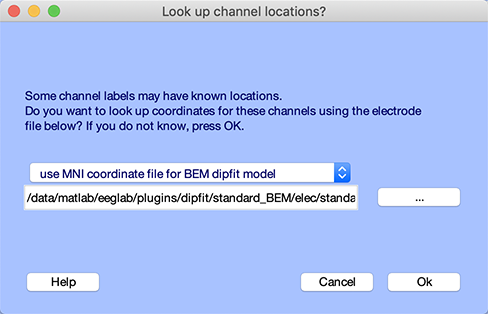 Press Ok on the window above and the channel editor window. Then go back to the head model settings using the Tools → Locate dipoles using DIPFIT → Head model and settings menu item. The window below will pop up. You can see that the matrix to align the electrode coordinate to the head model (edit box Matrix to align chan. locs with head model) mainly contains -pi/2 (-1.5708), which correspond to a 90-degree rotation in the axial plane (also known as the transverse or horizontal plane). This is because EEGLAB assumes that the nose direction is along a specific axis, while the head model uses a different convention. The Talairach transformation matrix, a vector comprised of nine fields [shiftx shifty shiftz pitch roll yaw scalex scaley scalez], is organized as follow:

In this case, the only alignment required is a 90-degree rotation between the electrode coordinates and the coordinate system of the head model. In case no co-registration/alignment is required, you may also select the No coreg checkbox.

Important note: If you change your channel locations, make sure to go back to DIPFIT settings to update the coordinate transformation settings.

Again, use the Tools → Locate dipoles using DIPFIT → Head model and settings menu item. Click on Manual coreg. in the DIPFIT settings window. A window appears. Change the resize values to 1.5 for all axes to see the electrodes (we are undoing the alignment for illustrative purposes). 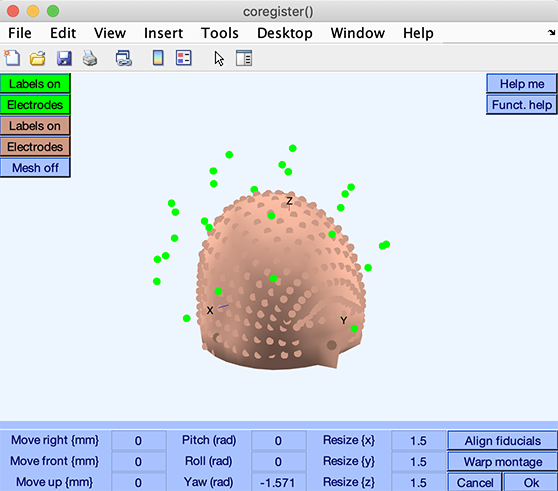 A channel correspondence window will pop up:

The channel labels from your dataset electrode structure are shown in the right column, while the left column shows channel labels from the template channel file associated with the head model. Arrows in both columns indicate electrodes with the same labels in the other column. If your channels’ labels do not correspond to the International 10-20 System labels used in the template montage, press the Pair channels button and choose the nearest channel to each of your dataset channels in the template montage.

When you press Ok, the function will perform the optimal linear 3-D warp (translation, rotation, and scaling) to align your channel montage to the template montage associated with the head model. The result will be shown in the channel montage window (see below). You may press the Labels on button to toggle the display of your channels’ label (green) or the template channels associated with the head model (red). You may also restrict the display to subsets of channels using the Electrodes buttons.

Manual fine-tuning: To finely tune the alignment manually, repeatedly edit the values in the edit boxes, which correspond to the [shiftx shifty shiftz pitch roll yaw scalex scaley scalez] transformation mentioned previously. The resulting co-registration window should look something like this: 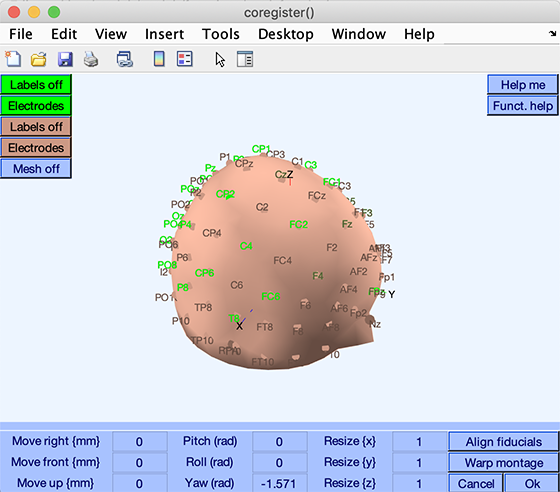 If you want to retain your modifications, press Ok to update the DIPFIT settings window. This will display the resulting Talairach transformation matrix in the edit box Matrix to align chan. locs with head model. In this specific case, you may press the Cancel button in the coregistration interface since no further alignment was necessary (we performed coregistration for illustrative purposes on a dataset that did not require further alignment). Then press Ok in the DIPFIT settings window and proceed to localization in the next section of the tutorial.

Thereafter, fiducial locations will appear in the channel co-registration window (above) and may be used (in place of location-matched scalp channels) to align your electrode montage to the template locations associated with the head model. Use the Align fiducials button to do this.

When plotting dipole sources in the next section of the tutorial, you may plot the head model head surface and the MRI. 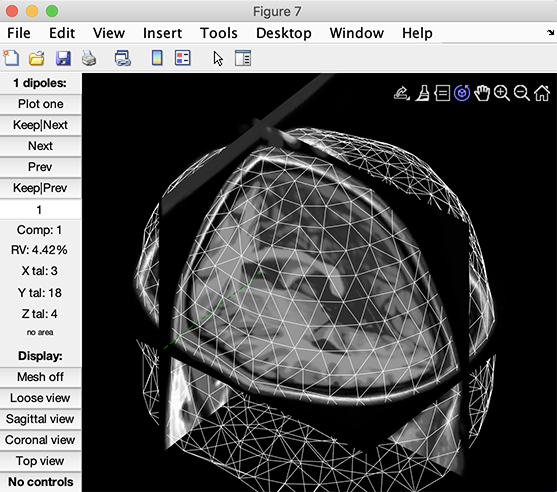 In this case, we are using the tutorial data and the standard BEM model described in the previous sections. The BEM head model mesh was extracted from the average MRI used for plotting, so the alignment is perfect. When using participants’ MRI and transformed them to MNI space (for example, using SPM), this allows checking the alignment between the MRI and the head model.